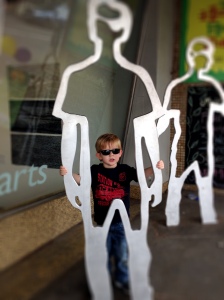 About this time last year, we welcomed someone new into our lives. He comes with us to the supermarket, to restaurants, and on holiday. He even hops into bed with us most mornings.

His name is Jake, and he is DorkySon’s invisible friend.

When this blog was still very new, I published a guest post by someone whose daughter had an imaginary friend called Polla.  It was such a sweet piece, but I remember thinking at the time how unlikely it was that DorkySon would ever have one, so attached was he to his beloved Binky.

How wrong I was. Over the last twelve months Jake has evolved from someone who merited only an occasional mention – once or twice a week – to a full-blown member of the family.

It has been fascinating insight into the way my boy’s mind works, and really rather lovely to watch.

Jake is very obviously a creative way for DorkySon to explore new ideas and thoughts safely, without feeling overwhelmed. When we found out that we would be moving to Australia, Jake came across here about six weeks before we did, to check everything out for us and make sure it was a nice place. He reported back to DorkySon, told him it was the perfect place for us, and we were then able to move without any upset or stress. Similarly, Jake started swimming lessons, nursery and then kindergarten all a few weeks ahead of DorkySon, and was able to provide reassurance that those things were great fun, and that DorkySon would have a blast.

We had a spell of a few weeks, just after Christmas, when poor Jake had a series of horrible accidents and injuries. He chopped off one finger by shutting it in a car door. He slipped off a roof where he was fixing tiles and hurt his neck. He even died for half an hour, one sunny afternoon when we were sitting in the garden. How to reassure your weeping four year old when his imaginary friend dies is not something I’ve seen in many parenting manuals – that’s really something of an oversight because I could have done with some help.

But now that we are so settled in our new house and routines – now the upheaval is over – that aspect of Jake’s existence has been pushed back a bit, and he’s more just a fun companion, an excuse to tell stories. He often goes on wild adventures around the world – to Africa on safari, or to Antarctica on an ice-breaker – and comes back to tell DorkySon about all the exciting things he has seen. A few weeks ago he even went to the moon. It was a drama-filled trip, because the rocket returned to Earth without him… but fortunately it popped back into space and picked him up again the next day.

We are not quite sure how old Jake is. He seems to have a birthday every three weeks or so, and we have to sit in bed in the morning singing Happy Birthday, blowing out the candles on his invisible chocolate cake. He enjoys riding his scooter, playing football and eating pancakes, just like DorkySon, but he also seems to be quite an independent little guy, and while there have been a few mentions of his mum and dad, he spends a lot of time travelling alone. Apparently he is an excellent driver, although prone to taking corners too quickly.

DorkySon seems fairly well aware of Jake’s limitations. I watched a wonderful little conversation between them the other night. DorkySon called out “Jake, Jake, can you fetch me that selkie moon poem?” (That in itself was fairly astonishing – I’m not sure where or when DorkySon has heard about selkies.). Jake was then berated for bringing DorkySon several objects – an ice cream cone, a strawberry yoghurt, a camera – that were quite evidently not the selkie moon poem. Eventually the right thing was procured, and DorkySon came over to DorkyDad, holding out the ‘poem’ for him in an empty palm. DorkyDad started to speak some words, as though reading from the page, but DorkySon shushed him immediately, saying “Don’t be silly Daddy, it’s an invisible poem. You can’t actually read it.”

According to a recent Guardian article, which I read with a wry smile, imaginary friends are becoming more and more common. You can’t help wondering if Soren Lorensen has something to do with that, but the consensus seems to be that it’s a harmless thing, a good way to develop a sense of imagination, and they tend to disappear, for want of a better word, in their own time.

As DorkySon becomes more settled and confident by the day, and begins to make ‘real’ friends during his days at kindy, I imagine it won’t be long before Jake becomes a less prominent feature in our lives. I just hope that when it’s time for him to leave us, DorkySon finds a way to do that which doesn’t involve loss of limb or life. Moving to Africa, or Antarctica, or the moon, will be just fine.