I’ve read so many social media posts from UK friends this month commenting on what a hard time they’re having starting the new year. Rather than leaving them refreshed, revitalised, and ready for 2023, the Christmas break has left them wanting to snuggle back under the duvet until spring.

On this side of the world, we are having the opposite problem. It’s not the cold and the dark that’s making it a challenge to feel enthusiastic about work. It’s the delights and distractions of summer. The combination of sunshine and school holidays – which last until the second week of February – is not the most productive environment for two work-from-homers.

Just before Christmas, I turned on my out-of-office, noting that I’d be back at my desk from January 16th onwards. That’s the longest official break I’ve ever given myself as a freelancer. But when that Monday rolled around, it still didn’t feel like it had been enough. I was still enjoying daily naps on the sofa with the dog. Still taking walks, reading books, and decluttering cupboards… and not feeling even a little bit of drive to start responding to client emails.  END_OF_DOCUMENT_TOKEN_TO_BE_REPLACED

It was our first trip out of Tasmania in more than two and a half years, and I reckon it’s fair to say we were all a little rusty.

DorkySon was now so tall, and so out of practice at air travel, that the simple act of standing up from his seat caused him to bang his head on the buttons above and accidentally call the flight crew. DorkyDad gave an Auckland taxi driver the tip of a lifetime when he glanced over and read the frequency of the radio station we were listening to rather than the metered fare. And I packed a comprehensive first aid kit that contained absolutely everything except the one thing we actually needed.

However, as international travel goes, it couldn’t really have been more convenient. A direct flight from Hobart to Auckland. One night in Auckland. A quick flight down to Wellington for five nights there. One more night in Auckland on the return leg, and then back across the Tasman for home. Short flights and a time difference of only two hours meant that for once, jet lag wasn’t an issue.

We were there to see dear friends – a couple who have known DorkyDad since his high school and college days. We saw one of them six years ago – on our chaotic trip to South Carolina that coincided with Hurricane Matthew. But it had been nine years since we had seen the other – when DorkySon was just four. They live in the US, but were over visiting family in Windy Welly, and it made sense for us to hop over at the same time. A New Zealand trip is so much quicker, easier and more affordable than that long, long flight to the East Coast.  END_OF_DOCUMENT_TOKEN_TO_BE_REPLACED

Remember when this blog used to be about fun stuff? Travel. Photography. Parenting a toddler. The occasional political rant.

Yeah, me too. Recently it seems to have turned into a catalogue of our various medical ailments instead. And we’re stuck on the letter C. Cancer, covid, canine total hip replacement…

The latest addition to the list is cholecystectomy. That’s the fancy and unpronounceable word that means having your gallbladder removed. I was relieved when even the nurses stumbled over it, and after eavesdropping on their chatter I learned that they abbreviate it to LapChol – or laparoscopic cholecystectomy.

I also learned that they don’t think it should be done as day surgery, because even done as keyhole it can feel pretty rough afterwards. And I learned what they think of some of the surgeons. And I learned about the covid outbreak on the floor below. But those are all other stories, not for today.   END_OF_DOCUMENT_TOKEN_TO_BE_REPLACED

It seems like covid is finally catching up to us all.

Even those of us who have exercised caution – triple or quadruple vaxxed, continuing to mask as mandates fall by the wayside, avoiding large crowds and enclosed spaces as much as possible. The virus is now so prevalent, here in Tasmania at least, that it’s becoming harder and harder to avoid.

The UK and US seem to be in a similar position. Our close friends and family members are sharing news of positive results almost daily. END_OF_DOCUMENT_TOKEN_TO_BE_REPLACED 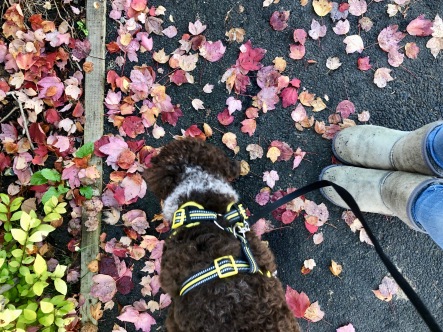 Yesterday marked six weeks since DorkyDog’s surgery. I’m writing this blog post on my phone, sitting beside her out on our front porch and enjoying the sunshine – although this is the first official week of Tassie winter and it’s only 6 degrees. I’m actually sitting down on the ground, sharing DorkyDog’s mattress and blankets, because it’s warmer down here than it is perched on the wooden bench above.

I can’t pinpoint an exact moment or one particular reason for the change – it has been a gradual improvement – but so much of the tension has eased. The routine is more settled. Everyone is happier. The atmosphere is calm.  END_OF_DOCUMENT_TOKEN_TO_BE_REPLACED