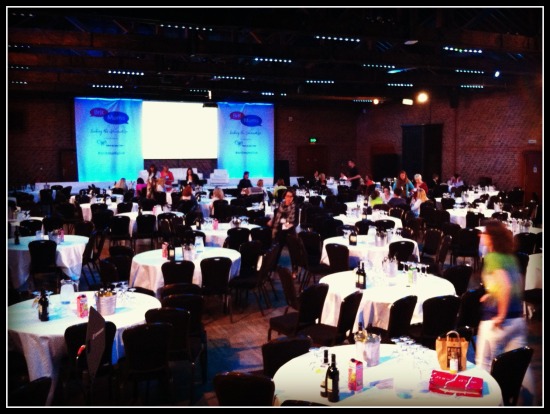 I always find it useful taking a day or two to reflect on a new experience before writing about it, and this weekend – BritMums Live and the Brilliance in Blogging Awards – is no exception. The post I can write today is a lot more measured than the post I would have written on Friday night.

Friday was the BiB Awards, and I will confess to finding the event totally overwhelming and not a lot of fun. I headed into London late Friday afternoon with friend and fellow nominee Emily (The Start up Wife). We had a lovely walk from the station to the venue – although we were so busy chatting that we didn’t pay enough attention to the map and took a much longer route than we needed to. It led us through some funky and interesting parts of London though, and gave Emily the chance to take some photos.

Some parts of the evening were lovely. Some big name bloggers who I’m a fan of – Kate Takes 5 and Michelle Twin Mum – came over for a chat and were both incredibly friendly and down to earth. I had a lot of lovely compliments about my dress, which had been provided by White Stuff, and a few people even recognised me because of it, saying they had seen my What I’m Wearing post earlier in the week! I was delighted to see Emily win the Snap Category, and also to see Lisa from Mummy Whisperer (another St Albans blogger) win the Inspire Category. It was a real honour to be a finalist in the Fresh Voice category myself, but I had no expectations of winning – it was only ever going to go to one person – and I could not be happier for the mighty Mammasaurus who has done so much to foster a sense of community in the year that she has been blogging.

But arriving just for the BiBs after the majority of other bloggers had been there for the afternoon of the conference made it feel like I never quite caught up; the sheer number of people and the noise levels made it very difficult to have proper conversations with fellow bloggers, who had already established themselves in tight groups. Drinks were served by ‘Wine Buffs’ – waiters dressed in little more than their pants, with slogans scrawled across their chests in body paint. I am no prude, but I don’t think they were a good addition to the evening. They made me feel extremely awkward and uncomfortable, and I was astonished to hear some bloggers – the very same ones who would have a hissy fit if there were scantily clad women serving drinks at an event – directing some pretty lewd and crude comments at them.

In all, I think the combination of the free-flowing Prosecco and the competition element of the evening brought out the worst in some people, and after I saw one BiBs winner being subjected to some pretty catty comments in the toilets after winning her award, I decided it was time to head home.

After a not-very-awesome start to the weekend, I can’t say I was much looking forward to the Saturday. Again, I was going to be showing up late. The Saturday morning pancake and bacon routine in the DorkyHouse is so enshrined that I wasn’t prepared to miss it, even to see Sarah Brown speak. 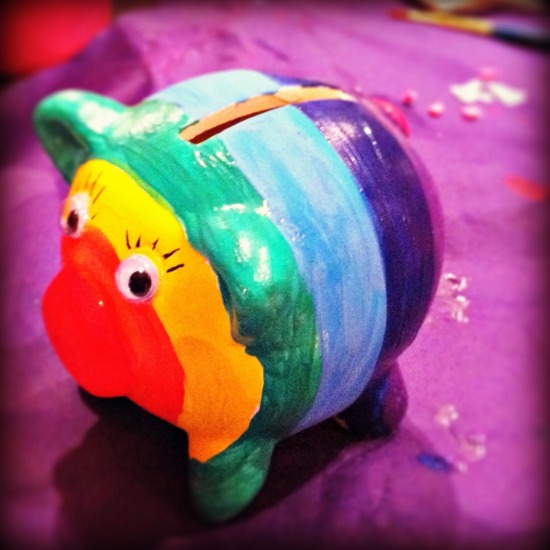 However, when I did arrive at the venue just before lunchtime, the Piggy Bank Kids stall was the first place I headed, where I had a good chat with their Projects Assistant Charlie, and made my very own Piggy Bank for DorkySon. The work they do is amazing, especially with such a small team, and I’m looking forward to staying in touch with them.

Shortly after that, I met up with Chloe from Cookiejar Life and it was really nice having someone to chum me for the rest of the afternoon. We grabbed some lunch and had a quick browse of the sponsor stalls, but there were no brands there that I really felt a connection with, so we didn’t loiter.

I had intentionally chosen sessions that focused more on the writing side of blogging than the promotional or commercial side. Sod The Stats: Blogging for Happiness was an excellent discussion den, with lots of honesty and emotion both from the speakers on the platform and from the attendees. Beyond Blogging: Writing About Your Life by Andrea Stuart from the Faber Academy was also interesting, but probably aimed at people further on in their thinking than I am.

The final two sessions of the day – Cherry Healey’s 360 Media session, and the Blogger Keynotes were both absolutely brilliant. There were some really incredible posts – Hayley from DownsSideUp made me weep buckets, Ellen from In a Bun Dance put a broad smile on my face, and Cari from The Secret Diary of a Secret Diary made me snort my wine out of my nose with laughter. This was the session that really exemplified for me what blogging should be about; funny, smart, honest people writing from their hearts. I’d like to say a huge thank you to whoever nominated my post Twitter is Like to be included as a keynote, because it was an enormous honour to stand up there and read with so many other talented bloggers. I have been overwhelmed by the lovely response. (Thanks also to lovely, lovely Mother Scuffer for this photo of me – see more of her BritMums photos on her own blog here.) 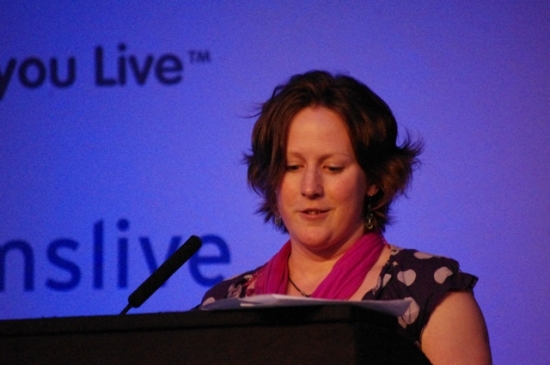 So how to sum up? I have to acknowledge the incredible amount of work that must have gone in to organising the conference. Huge thanks are due to Michelle, Susanna, Jennifer, Karin and everyone else at BritMums. I hope they are all taking it easy this week.

On balance, I’m glad I went and I’ve taken some valuable lessons away from the experience. The Blogger Keynotes, the Blogging for Happiness session, and a lovely, lovely chat with Cherry Healey have reminded me of the best bits about blogging. If you are prepared to put the effort into producing strong writing then you can create genuine connections with people. That for me is a far more important reward than high monthly stats or rankings, so I think it has given me the confidence to blog less, but blog better.

The swag bags and the sponsor stalls are all harmless enough, I suppose, but it’s not really what I’m about. I have only recently started to receive PR offers that are even halfway appealing, so I’ve said yes to a couple of things to see how it feels – and the conference has reinforced what I’d already decided. I don’t want to do many reviews on my blog. It doesn’t sit right with me. If I write about a company I want that to be because I love them anyway, not just because they’re providing me with products to test.

It would be great to find one brand that I felt a connection with in the same way that I have one charity I feel a connection with. But the dribs and drabs – a craft box here and a photo book there – is not really for me.

Similarly, I will stick with promoting my blog on Facebook and Twitter, because I have fun on those two sites anyway, but I’m not going to join Pinterest or Google+ just to try and add a few zeros onto the end of my monthly page views. I’d rather spend that time coming up with ideas for posts, I think.

Everyone had said before the conference that the best bit about it would be meeting other bloggers, and in a way that is true – I met a few really interesting and sweet and funny people. But I think my desire for a ‘genuine’ blog experience also extends to the way I’d like to forge friendships with other bloggers. I already have a few brilliant friends that I have made through blogging – but they are all based on pre-existing connections. Maybe we support the same charity, or maybe we live in the same town, or maybe we have something else in common… I would like to have more blogger friends, but I think I would like those friendships to happen organically – because I have connected with someone’s writing rather than because I happen to have sat next to them at a conference.

I’m really glad I went. It has reminded me of the important things about blogging. I’m just not sure that the important things – for me – include conferences. A year is a long time to think about this, so by next June I may well have changed my mind, but right now I’m not feeling like BritMums Live is my natural or most comfortable territory, and I don’t think I’ll be going again.