No matter how many times you’ve done it, there’s still something miraculous and disconcerting about strapping yourself into a metal tube and flying across the world.

Airlines go to great lengths to persuade you that it’s a normal and comfortable thing to do. They try their best to make that tube feel like home. Qantas welcome you with a hearty ‘G’day mate!’ and hand out complementary socks with cartoon kangaroos on them. Finnair design their cabin lighting to resemble the aurora borealis, and Loganair provide Harris Tweed headrests and Tunnocks caramel wafers. But when you undertake ten flights in three weeks, from Tasmania to the Outer Hebrides and back again, the resulting sensory overload means there’s no escaping the strangeness of air travel.

We started with an easy flight: Hobart to Melbourne, and a night in the airport hotel. DorkySon and I pressed our noses against the window and rated people’s parking jobs out of ten. The next morning it was eight hours from Melbourne to Singapore: tiny twin babies in the row ahead of us, and an aborted attempt to watch Tim Winton’s Breath. The tinny headphones did no justice to the quiet dialogue so I switched to Moana, then laughed and cried my way over the Java Sea.

At Changi, we saw signs for the famous water lily garden but instead kept on walking and found a screen to watch the Grand Prix. A besuited businessman turned around in his chair and pointed at DorkySon, who was providing whispered but excited commentary.

“How old is he? He’s amazing. He knows so much about it!”

The next flight – all twelve hours of it – wasn’t until midnight. To our bodies, already out of synch with our time zone, that felt more like 3am. We snacked and walked to keep ourselves awake, then finally fell asleep within minutes of boarding. 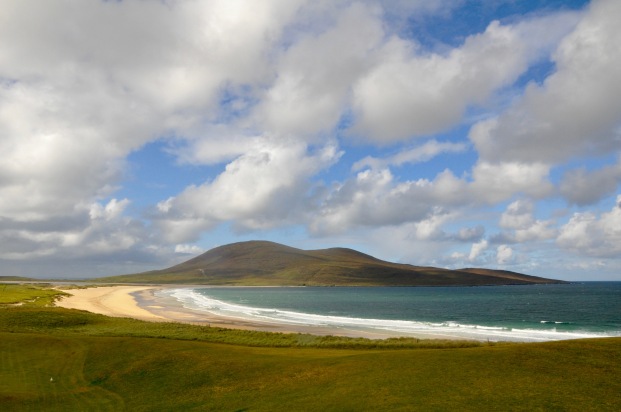 Helsinki airport was everything you might hope for. Delicious rye bread, strong coffee and blueberry juice for breakfast. Frosted glass and bold Marimekko prints on the walls. A couple of hours to relax, and then onwards again to Scotland.

Edinburgh – for just one night of recovery – was a blur. I remember a hot, deep bath that felt excellent. A gin and tonic with lunch in the hotel. An afternoon nap and a walk along the Shore before early dinner with a much-loved friend. It was all familiar and yet so very different. The cabbies still grumbled about the trams. I kept expecting to see someone we knew – and in the restaurant, on the next table, unplanned, we did. But DorkySon stood puzzled as he tried to make sense of the pedestrian crossings, and every TV channel had a Brexit news ticker along the bottom of the screen.

The next morning it was time to pack up again, and a reminder of the horrors at Edinburgh airport. Cramped check-in desks, poorly managed queues, surly service and soggy croissants at All Bar One. I went to the chemist to buy mouthwash, and tried to pay with dollars. I hoped that when we got to the islands, Scotland wouldn’t feel so small.

Tapping into the free wifi, we learned there had been heavy rain and a landslide in Harris, blocking the only road from the airport to the village. It was not as dramatic as a hurricane, but it still wasn’t ideal. Nothing to do but get there and see if we could pass. 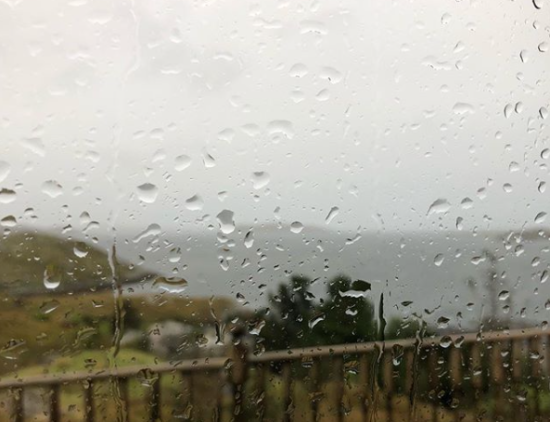 We could. The road was cleared, and there were smiling, familiar faces to meet us at the airport. We laughed when it took longer to hand us the hire car keys than it did to turn the plane around and take off for Edinburgh again. Island pace… always an adjustment.

There followed a week of excellent family time and terrible weather. DorkySon’s highlights were serving petrol with his Grandpa, and seeing a waterfall blown back uphill in the breeze.

I had forgotten, somehow, what it’s like to live in a place where days can pass without a break in the clouds. Where the rain is horizontal, and the wind makes conversation impossible. It was not the week of beach time and hill walks we had been hoping for, and when I saw friends on Instagram sharing photos of Hobart’s spring I felt an ache for its vibrancy. We celebrated the autumn equinox in the North, but even as we did I missed our birds, our sunshine, the blossom in our garden.

The enforced quiet was no bad thing, though. We watched otters and dolphins from the window, and woke each morning to the low hum of the ferry’s engines as it came in to the pier. On the other side of the house we saw gulls gliding on the wind, trying to land on a neighbour’s chimney where the warmth must have outweighed the unpleasantness of a smoky beak.

At lunch one day, a great gathering of aunties and uncles and assorted other relatives, I had warm baby cuddles with the newest member of the family and savoured the fact there were four generations in the room. DorkySon duetted with a cousin he barely knew – his vocals, her ukulele – on a song they’d both learned through YouTube. All the complaints about kids and technology were suddenly rendered redundant. 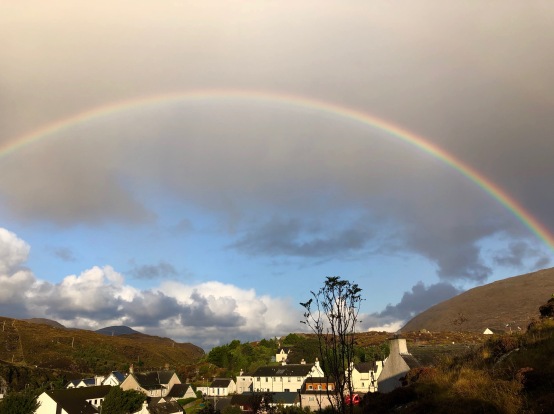 In those moments when the clouds did clear, rainbows soared over the village. There were moments when a shaft of light caught the heather on the hill behind us, when there was a yellowhammer on the deck, or when the low tide exposed the seaweed on the rocks – and I was reminded of the beauty to be found in more muted colours.

We had fresh shellfish delivered to the door – lobster and langoustines so lively that one caught DorkyDad on the finger and drew blood. Food chain karma: he didn’t complain. At night, the lights from the distillery shone over the village, the glass panes and steeple of the new building reminding me of traditional church architecture. Before we left, we bubblewrapped two bottles of gin to bring with us, converts to this surprising new religion.

I saw some changes on the island. When my Dad drove us down to Uist for the day there were striking new houses dotted along the roadside. My favourite beach is now overlooked by a community and conference centre, and Scalpay has got a cracking bistro down at the north harbour. Perhaps to counterbalance the ecclesiastical overtones of the distillery, there’s also now a church in what used to be a bar.

But it is still the same place, with a deep green sea that calmed the inexplicable anxiety that sometimes rose in my chest. When there was a power cut that wiped out the whole village, we were out on the grocery run. The shopkeeper found the switch to pop his till open manually so we could pay in cash, and there were racks of faded jeans hanging above our heads that I suspect had been there since I was a toddler.

When DorkyDad was glued to his phone, transfixed by the implausible comeback of Tiger Woods, it brought back memories of my Granny watching golf on her TV, the volume turned up so loud that I would leave with a ringing in my ears. I reminisced with my older cousin about her teaching me how to make paper fortune tellers, and her face lit up as she remembered those fruit-scented felt tip pens from 30 years ago. DorkySon dug around in boxes at my Dad’s house and brought out Lego and Playmobil figures that were not just mine but my brothers’ before me. He turned down the offer to take a few with him, trusting they would still be there next time. 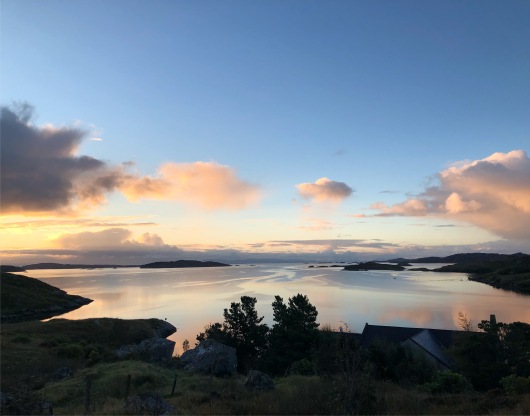 For as long as I can remember, I’ve had trouble sleeping the night before I travel. A tightly wound internal clock means I’m reluctant to drop off in the first place. When I finally do, I wake every hour.

As a teenager, visiting Harris for the school holidays, I would usually go out for my last night on the island. Booked onto the 6.30am ferry from Stornoway, I would stumble through the door of the house at 4, smelling of whisky and Smirnoff Ice, scrambling to throw my belongings in a bag. My best friend and I would have walked each other home ten times to delay our last goodbye.

These days, I deal with insomnia rather differently. I’ve reached a truce with my sleep patterns and if something is keeping me awake – a heady mix of hormones, a full moon, or the prospect of an early morning flight – I just go with it. Breathe. Rest. Count down the hours.

So it was this time. Ignoring the unresolved ache in my back from too many hours of aeroplane seats, I closed my eyes and reflected on the holiday: the love of family, the distinctive palette of the landscape, the layers upon layers of memories and stories that we add to every time we visit.

I felt as I always do on the island that the boundaries between people and place, between past and present, are a little more permeable than they are elsewhere.

It had been a good week. Time to keep on moving.