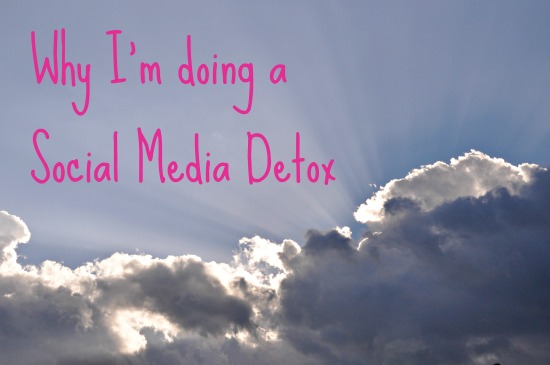 For all the years that we have known each other, DorkyDad and I have done a January detox. It is usually much needed. Like most people, we fill our cupboards even fuller than usual over the Christmas holidays, with booze, biscuits and other unnecessaries.

Come the New Year, our bodies are practically begging us for a break. So we both give up alcohol for the month, step up our exercise regimes, and cut back as far as we can on carbs and candy.

After a grumpy, jumpy first week, we tend to find that we are sleeping much better, feeling more clear-headed and starting to lose our little festive potbellies. We finish the month feeling refreshed and energetic, ready to face the rest of the year.

We are doing all that again this January, but two weeks in I don’t feel like it is enough. My body is definitely feeling much better. But my brain? Meh. Not so much. It still feels overloaded. I am not in the calm and relaxed place that I should be. I am craving peace, and space, and silence.

Over the last week or two, the idea of a retreat has become very appealing. I have been dreaming of some hilltop villa where you get hauled out of bed at sunrise to do yoga on the beach. Berries and nuts for breakfast, fresh air, early nights… I’ve been longing for that simplicity of living that gives the important stuff – feelings and sensations – more clarity and colour.

So I’ve decided that in addition to the physical detox I’m going to do a mental one too. I’m going on a month long social media detox.

The only online activity I’m going to allow myself is email to my personal address.

2013 was a momentous year for us and without the love and support of our friends and family, many of whom we are mainly in touch with online, our move would have been much harder.

Part of the joy of new experiences is sharing them with people you care about, and social media has allowed me to do that. I have loved blogging about Tasmania, and uploading photos of all our activities. Twitter has been an incredible source of local information. But in the last few weeks I’ve been wondering if I’ve come to rely a little too much on that validation that comes in electronic form – the blog comments, the Facebook likes, the retweets…

It is also inevitable that starting something new, as we have done, means letting go of some old people and places and saying goodbye. We – I – have been so caught up in the excitement of our new life that I haven’t been as smart as I should have been at dealing with that. But I know myself well enough to realise that I am carrying around some little blue bubbles of sadness inside me that need some attention, and the fewer distractions there are during that process the better.

I want to feel a bit less busy. I want to get back to basics in my head in the same way that I’m doing for my body. I want to spend more time reading, writing, listening to music, walking, sitting in my garden, taking photos, trying new recipes… there are dozens of ways of spending time that would be more productive than goofing around on the internet.

I know already that it’s going to be SO HARD. Facebook is the first thing I check every morning while I’m waiting for the kettle to boil. The time difference means that as I’m starting my day, most friends are coming to the end of theirs, and I love that ten minutes scrolling through my newsfeed and catching up on their news. It helps me feel closer, and if I’m ever feeling a little homesick there is nothing more comforting than seeing people share the mundane details of their day.

Facebook has also become the place where my friends share their big news. Engagements, weddings, pregnancies, births… all the rich stuff of life is announced there before anywhere else. And it’s where some of the best informed and most intelligent political debate I’ve seen recently has been – just folk chatting with each other in one thread or another – and often making more sense than opinion pieces and commentary in more traditional media.

So I know I will miss that.

But there’s also an awful lot of rubbish. Some of it – adverts, kitten pictures, Candy Crush invites – is stuff that you scroll through without even pausing. Some of it is clickbait – timewasting links that you can’t help yourself from checking out.

I won’t miss that unnecessary white noise in my life at all.

Here is what I know. Some of my very closest friends don’t use social media at all, and we still find ways to keep in touch. We send lengthy emails, we exchange photos on WhatsApp and we even – shock, horror – write each other letters that take a week or two to arrive. Our friendships have endured despite – or perhaps because of – the fact that we are not in touch every single day.

So I suppose I am hoping for two things from the experience.

The first is better, more intentional relationships, where I have to actively contact the people I care about, and say something substantial rather than just Liking a photo of their morning cuppa.

The second is that I’d like to remind myself how to just enjoy an experience in itself, without rushing to share an update about it. I suspect the writer in me is so engrained that I’ll continue to record the little details of our days, but I’ll be reaching for my notebook rather than my phone, which is no bad thing.

I hope you’ll bear with me, during this social media detox. I hope you’re interested enough to pop back in a month or so, to see how it has gone. And I hope you don’t do anything too interesting while I’m offline.

See you on February 15th.