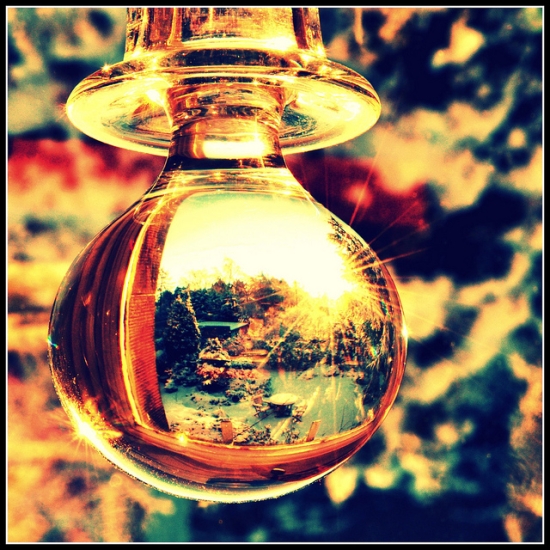 The theme over at The Gallery this week is ‘My Awesome Photo’. That theme sounds a bit boasty – I’m not sure that I’d describe any of my photos as awesome – but having said that I didn’t have to think too hard about which photo I’d submit.

I like this shot because it was almost entirely accidental. I took it about this time last year, when I was still just playing around and getting to know my new camera. We had a glass decanter sitting in our kitchen window, and I was trying to get a close-up of it. It wasn’t until I’d uploaded the photos onto my computer that I noticed I’d also managed to capture the magical, snowy scene outside the window, as reflected in the glass stopper. You can see so much detail; from the snow on the trees to the wooden picnic table and chairs. It’s like a wee peek into another world.

I didn’t do much processing, just flipped the photo 180 degrees, ran auto correct and then a cross process action in Picnik. It’s the only photo of mine that has ever featured as a finalist in a Pioneer Woman competition, and I had planned to get it printed up as Christmas cards this year but, y’know, there’s just not enough hours in the day!

We have enjoyed a bright and sunny day in Hertfordshire today, but I believe my Edinburgh friends have had their first scattering of snow. Ha! This photo is for them.

To see what other bloggers have done with My Awesome photo, check out The Gallery here.