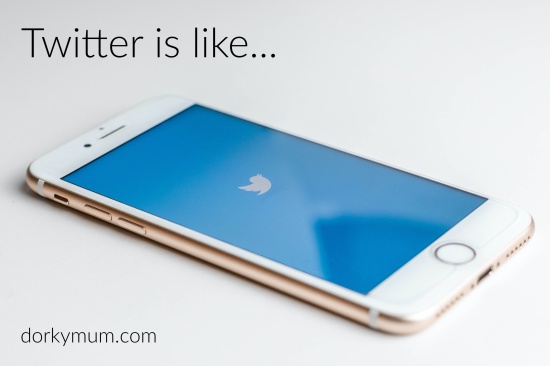 I was out for coffee the other day with a non-tweeting friend. “So what is Twitter actually like?” she asked.

I ummed and ahhed, and explained it all very badly, mumbling some fairly dry stuff about retweets and hashtags and follows. She didn’t look convinced. So I’ve been thinking about it ever since, and here’s what I’ve come up with.

Joining Twitter is like suddenly discovering an extra room in your house. You’re just walking from your kitchen to your living room one evening and you notice a door that you’ve never opened before. You decide to turn the handle and have a look.

You open the door, step into the room, and it’s as though you’ve just arrived at a really busy party. In one corner of the room are a group of people you’ve known for years. “Hurray!” they say. “Here’s DorkyMum! We’ve been wondering where you were.” You start to walk over to them, and notice they’ve already bought you a pint of your favourite beer. Brilliant. You love this room already.

But then something catches your eye. Look! It’s the woman who wrote that book you loved when you were a kid! Wow. You wonder what she’s doing here. You raise your hand, a bit shy and nervous, and to your relief she smiles and gives you a big cheery wave in response.

You’re about to wander over and speak to her, but as you turn, you get stopped in your tracks by another group of people. You don’t know any of their names, although a couple of them look vaguely familiar. “Hey!” one of them says. “We read on your blog that you’re a big fan of obscure Scottish folk music. Come over here and listen to this.”

So over you go, and you stand in the corner for a few minutes, swaying away and tapping your foot to a brilliant track that you’ve not heard before. The group of people are all really friendly; you discover that you have some other interests in common too. One of them likes photography, and another has a son the same age as you. You feel pretty comfortable, and think you could probably just hang out in this corner of the room for a while.

But wait! There’s your MP! He’s a crabby old Tory bastard, and you’re not too sure what he’s doing at this party, but you really want to speak to him about a campaign you’re involved with so you tear yourself away from the music and chase him across the room for a chat.

Eventually the room starts to grow a little quieter, and you decide that you’ve had enough for one night; that you should probably get some sleep. So you wave goodbye to everyone and head off to bed, closing the door to the room carefully behind you.

The next morning when you wake up, you fully expect the room to be gone. But guess what? It’s still there. In fact, it’s there every morning from now on.

Some days, you get up and you’ve not had enough sleep, so you’re grumpy and bleary eyed. You poke your head into the room, scowling, and you snarl at the assembled company. A few of them snarl back, because they’ve had a bad night too. But then one person offers to make you a coffee, and someone else holds up a picture of a baby otter, which forces you to crack your face into a smile.

Some days you wake up, and you’ve already got too much noise in your head, and you’ve got lots of jobs to do, so you don’t go near the room at all. The door stays firmly shut.

Other days you get up, head for breakfast in your kitchen, turn on the radio, and catch the last bar of an old song you really like. Damn, what was that song called? You can’t even remember who sang it. So you poke your head into the extra room, and shout out “Hey! Does anyone know what that song was that was just playing on the radio?”

“Sure!” calls someone standing over on the left. “It was The Dorky Song, by the Dorkys.”

Someone standing over on the right shouts out “I’ve always liked the Dorkys!”

Then at the back of the room an old crackled voice pipes up, “Ahh, thank you for all the love guys. I was the drummer with the Dorkys!”

Everyone in the room cheers.

Occasionally, you’ll be standing in the room chatting, and you’ll hear raised voices and then a scuffle will break out in a far corner. Someone has had one-too-many glasses of wine and said something offensive. “Idiot,” you can hear people muttering under their breaths, as the offender is hustled out of a side door until he calms down.

Sometimes you’re in there, and it’s as though everyone is high. There’s big news on the way, and the vibe is crazy. There’s a real buzz in the air. You’re really supposed to be somewhere else, but you can’t tear yourself away.

If you never find this room in your house – the extra room – it’s okay. You really like your house anyway. It’s comfy, and cosy, and full of lovely things. You don’t ever feel like you’re missing out on something, because you don’t know otherwise.

But if – when – you do find it, a whole new world of opportunities and possibilities and connections opens up. It’s crazy. But it’s kinda fun.

Photo by Sara Kurfeß on Unsplash