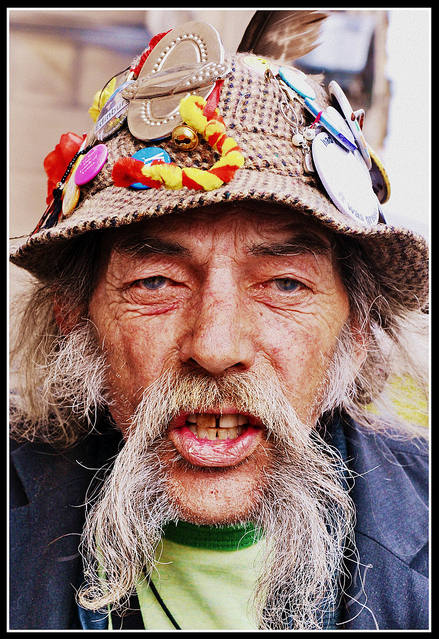 The theme over at The Gallery is ‘Faces’ this week. We actually have until next week to do a post, but as we’re moving house in the middle of next week and I’m likely to be offline, I thought I’d get in there early.

I was torn between a ‘pretty‘ picture and an ‘interesting’ one but in the end decided to go for interesting. I know this is not a photo that everyone will love, but it’s an important one for me for a couple of reasons.

The guy is called Lewis, and he is something of a local celebrity. He can often be seen walking up and down the Royal Mile in Edinburgh, or sitting on a bench in the centre of town and chatting with a crew of assorted other characters. He is very friendly, and has some good banter, although has also been known on occasion to hoist up his kilt and bare his arse to tourists if they try and take a photo without asking his permission.

I think he has a brilliant face – brimming with character. You can tell that he is someone who has really lived. The slightly aggressive look in his eyes is tempered by the jingle bell and badges on his hat. And really, who wouldn’t want to grow themselves some awesome facial hair like that?

I like this shot because it’s the first time I ever approached a ‘stranger’ in the street and asked to take their photo. I got quite into street photography for a while, but to begin with I always took candid shots rather than asking for permission. I ended up torn between frustration at not being able to get close enough to people to capture anything very interesting (it’s quite hard to blend into the background when you’re pushing a pram with a noisy toddler in it…), and a slight feeling of unease I couldn’t shake off about taking people’s photos without them knowing.

This style – more street portrait than street photography, I guess – is the focus of the 100 Strangers project which encourages photographers to get out of their comfort zone and take pictures of strangers, but approach them for permission first, and have a chat to find something out about them. It appeals to me greatly, although I haven’t committed to doing a full 100 shots yet. If I did, I think I’d try and find Lewis again, and ask him to be my first.

See how other people have interpreted the Faces theme over here on Sticky Fingers.