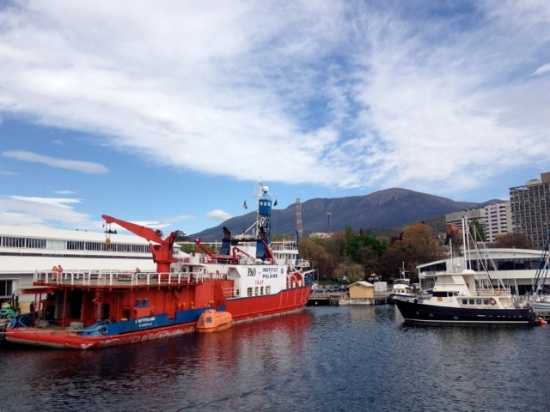 Friday was the last day of DorkySon’s school holidays, and as he has been asking me for ages if we can visit The Museum of Old and New Art (MONA) again I thought we’d better take advantage of a sunny day and go for it.

By happy coincidence, I’d received an email earlier in the week asking if I wanted to take part in a project organised by the International Currency Exchange, in which bloggers around the world would be sent £100 GBP and challenged to make the most of that money for a day out in their country. £100 GBP is equivalent to around $180 AUD, which would allow us to have a hugely indulgent MONA experience – how could I say no?!

We decided that rather than drive up the Brooker Highway to the Museum, we would instead get a taxi into the centre of Hobart and then take the MONA ROMA boat from the harbour so we could enjoy the thirty-minute ride up the river. Even before we’d set sail, DorkySon was thrilled because he nabbed a window seat on the boat and sat watching the workmen who are currently building the new Brooke Street Pier. As we set off, we got a great view of the Astrolabe and Mount Wellington, and then as we got a little further out we sailed right past the Aurora Australis and the new CSIRO research vessel RV Investigator.  He loved the graffit-style art on the walls, the sheep seats on the outdoor deck, and the resident (live) parrot. He also spotted some tasty looking biscuits for sale from the onboard bar, and persuaded me that he should have one as a second breakfast… 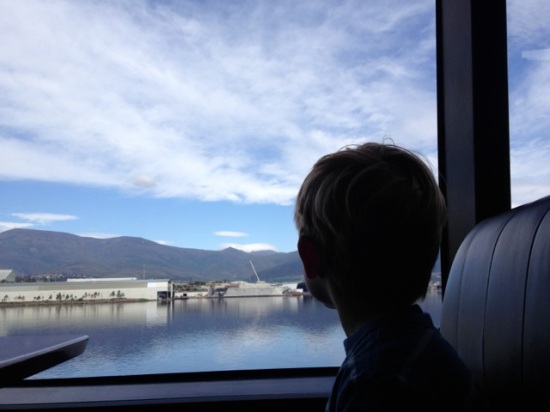 When we arrived at MONA, DorkySon headed straight for Wim Delvoye’s large steel cement mixer which is one of his favourite exhibits there. We then spent a happy hour or so looking around inside. I decided not to try and steer him in any particular direction, just to wander where he wanted to and see what grabbed his interest. He loved Julius Popp’s Bit.Fall, which is a waterfall of words; Wilfredo Prieto’s (Untitled) White Library which is a shelved room full of blank books; Snake by Sydney Nolan, which you can see in the photo below and Erwin Wurm’s Fat Car which is an obese, wobbly looking Porsche. He was less keen on (in fact quite bothered by) the fluffy sofas dotted around the museum that make a noise when you sit on them.

Quite a lot of the Museum is closed off at the moment while they prepare for the next big exhibition – Matthew Barney’s River of Fundament – so if you want the full MONA experience wait until late November.

The great thing about a trip out to Berriedale though is that it’s not just about the exhibits. After our look around we went for a great lunch in the museum café (where somehow DorkySon managed to persuade me that he needed both a macaron AND a chocolate éclair for dessert…) and we had a chat about what we’d seen. I love the lack of pretension when DorkySon talks about what he has seen in a gallery or museum. He is very straightforward about what he likes and what he doesn’t like, and why that is. Our taxi driver on the way into Hobart had warned me that MONA is a ‘confronting’ place, and I suppose in some ways it is, but DorkySon is pretty self-aware and if he spots something that he thinks is going to be too scary or weird for him, he just avoids it.

It gave me a good laugh though when he asked who owned all the art in MONA.

“It’s a man called David Walsh,” I said. “Daddy’s reading his book at the moment. You can look at it when we get home.”

“David Walsh?” said DorkySon, with a look of horror on his face. “Isn’t he the really mean man who runs Australia?” 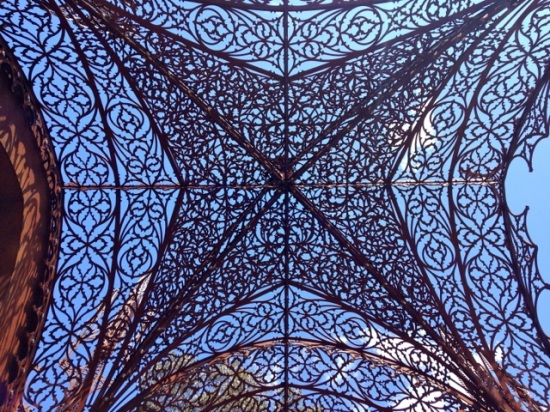 After lunch DorkySon wanted to spend the last of our pennies in the museum shop where, bizarrely, he bought a washbag shaped like an underground train. He then confided that MONA is his second favourite museum in the world, after the Transport Museum in London. High praise indeed.

We had forty minutes until our boat back to Hobart, so we wandered onto the green where the MONA Market takes place in summer, and sat on the beanbags in the sun for a while. We also walked down to see another beautiful piece of Wim Delvoye’s metalwork – the MONA Chapel.

In that unquenchable way that wee boys have, DorkySon announced on the boat ride home that he was somehow still hungry. We had a couple of dollars left, but I drew the line at a fourth biscuit, so he settled for a Moroccan lamb sausage roll.

Not a bad way to end the holidays. 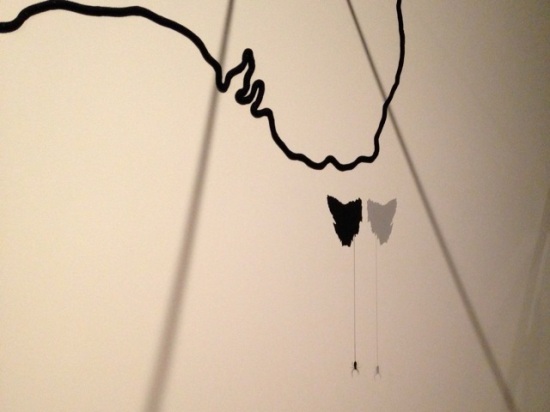 Our conclusion is that in Australia, a hundred quid can buy you a great day out, and a lot of biscuits.

Thank you to International Currency Exchange for inviting me to take part in this blogger project. ICE is one of the world’s leading providers of retail Bureau de Change and online foreign exchange services. They have branches throughout Europe, the US, Canada, Mexico, India, China, Malaysia, Singapore and Australia. They also do prepaid money travel cards.