How did it get to be the end of June already?! Madness…

I’m off to BritMums Live this weekend, and then we’re spending some time in Scotland, so I’m just squeezing in my June review roundup while I have the chance. As ever, any review items I’ve been sent are noted in the disclosure statement at the foot of the post, and all the others are things I just love.

Moves App: It is no secret that I am not a big fan of exercise. I walk everywhere, so there’s that. Once or twice a year I’ll blow the cobwebs off my trainers to go for a run. And occasionally I’ll buy a fitness DVD and let it sit on the shelves for a few weeks, hoping that by some magic process its mere presence in the room will shave inches off my waist and tone my abs… but that’s really about it. An optimistic friend has nudged me to try a free app called Moves, which tracks your physical activity throughout the day as it runs in the background of your phone. Each day, and then again at the end of the week, Moves send you a notification letting you know how much exercise you have (or haven’t) done, hopefully motivating you to do a little more each time. I am starting from a pretty low base, so you’d think it’d help, right? I’ve downloaded it today. Will let you know how it goes… 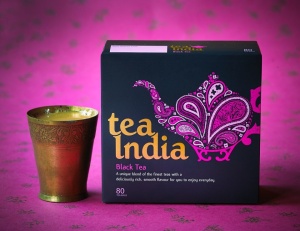 Tea India: Someone said to me just before I moved down to Hertfordshire that you could always tell a St Albans plumber because he’d ask you for an Earl Grey. Well I have an inkling that may be about to change… if I’ve got anything to do with it the local plumbers are all going to be asking for a Vanilla Chai soon. Tea India sent me two boxes of their tea to try – Black Tea and Vanilla Chai – and both are really lovely. The black tea results in a stronger and tastier brew than most brands that I’ve tried before, which suits me really well (what’s the point in tea that doesn’t taste like tea?!). The Vanilla Chai is both mellow and spicy, and has been very soothing for the sore throat that I’ve had this week. I haven’t yet had the chance to try any of Ravinder Bhogal’s recipes that have been created to accompany the range of teas, but judging by how yummy the Banana Vanilla Chai Tea loaf over on Mummy Mishaps’ blog looks, I really should!

Bloglovin: I’ve been having a bit of an online spring clean recently. Having moaned for months about the amount of junk emails I get – promotional gubbins from restaurants, shops and websites – I’m finally taking the time to unsubscribe from them all as they come in, rather than just deleting. One nifty little thing that has cut down on the number of times my phone ‘pings’ in a day is signing up to Bloglovin. Previously, I subscribed by email to all the blogs I like. It guaranteed that I never missed a post, but it was starting to get a bit unwieldy – I was getting 30 or 40 emails a day just from other bloggers, and I was struggling to leep up with reading them all. Bloglovin allows me to view all the recent posts from all my favourite blogs in one place, without any emails or notifications filling up my inbox. Should have done it ages ago!

Coconut Oil: Apparently I’m about five years later than the rest of the world to discover the wonder that is coconut oil, but I’m so glad that I finally have! It was this fab post from Lucy at Lulastic and the Hippyshake that turned me onto it. Since I invested in a decent sized tub of the stuff made by Pukka, it has replaced almost all of my other beauty products. It makes a great moisturiser for face and body; it’s lovely for lips, and is a super-duper effective hair conditioner. In the last few weeks I’ve also used it to soothe sunburn, tame my eyebrows, repair my poor neglected cuticles, and speed up the healing process on several of DorkySon’s grazes and bumps. We’ve got several trips away over the summer, and it’s going to be such a joy only having to pack one all-rounder product instead of dozens of bottles and tubs.

Give and Make Up: As well as the online spring clean, I’ve been having a bit of a declutter in the house and, as ever, one of the things I wasn’t sure what to do with was the bag of assorted stuff from the bathroom cupboards. All those bottles of unwanted perfume… moisturiser that I’ve used once and never again… shampoo that didn’t agree with my hair… It seems such a waste to chuck it out, but local charity shops never seem keen to take it. I’ve finally found an answer though. Give and Make Up is a not-for-profit organisation that collects unwanted toiletries and cosmetics and distributes them to Women’s Aid and Refuge centres. Even if they are slightly used (as in something that you’d be happy to give to a friend, not the dreg ends of a bottle) all donations are much appreciated. I’m going to make time next week to package up mine and send them in, would be lovely if anyone else wanted to do the same.

Those are the things floating my boat this month – how about you? Do share some links to the things you love in the comments below.

Disclosure: I was sent two boxes of Tea India teabags for the purposes of this review. I received no other payment, and all opinions are my own.