I’m taking some time offline over the next week or so, but to keep things busy on here I’ve invited some of my favourite blogging friends to write guest posts for me. Today’s is from Anya, who blogs as Older Single Mum and also as The Healer. You can say hello to her on Twitter here. 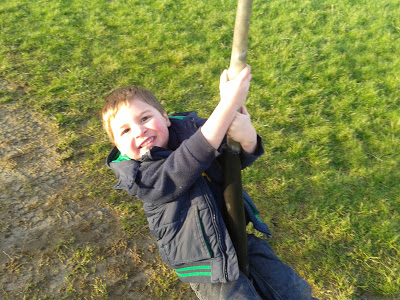 This is Aiden, a few weeks short of his fourth Birthday.  He’s a consummate comedian and puts the manic into maniac.

It struck me recently that he’s the same age his brother was when he came along and I can’t believe how different they are.

This one is a shock on so many levels.  I was 45 when I had him (after three miscarriages altogether, but ‘only’ the one between the two of them), within a marriage was that well past the rocky stage. I’d actually begun divorce proceedings after a first and last ‘fling’ with my husband in a while before discovering I was even carrying him, plus his whole personality is like that of someone who waited twenty years to get here – which he might have – and all his excitement is coming out at once.  All. The. Time.

‘Exuberant,’ we could call it and keeping him alive is a daily challenge.

The first one, though, Robson, is a bookworm.  He finds his little brother ‘quite annoying’ and misses the time we shared together, just the two of us.  Not just since we booted out his dad when I was around six months pregnant, but before that, too, while his father worked away most of the time.

He remembers us enjoying a bath together every evening. (I think I’ve done that once only with Aiden in his life). He is now reading books to me that we used to share in peace in bed every single morning.  There is precious little peace now and lamentably less time together, just him and me, with me being a single parent and I ache to give him more sometimes.

He’s the one who insists upon red pesto on his spaghetti, while the other one has to have green. He loves cricket, while his more active sibling may as well have been born with a football attached to his limb. And he’ll sit happily staring at a screen, listening to music, easily memorising the exact length of each and every track and the order they’re in, all of which he’ll eagerly share with anyone who’ll listen, particularly if it’s the Bee Gees or Barry White.

I know. I am a terrible mother. At least our Foreign Language students can be relied upon to bring his artistic tastes into the 21st Century!

He seemed so big when the baby came, whereas Aiden seems comparatively small at the same age – even though he is actually quite a bit larger than Robson was. I realise I’ve leaned on him more than I ever would his little brother now and it often makes me wonder what life is all about – probably more often than is healthy – because, before each of them came, I could ‘see’ them, individually, in my mind’s eye – consistently – for a good few years ahead.

Also, once, I had a dream – that I was lying on a lounger in the sun and three very young boys came along. The first one quietly stayed next to me, the second had a brief look and  hardly engaged before moving on, while the third one breezed in, then contentedly just plonked himself down with us.

This is exactly what they’re like now, my two boys (not forgetting the one in the middle who didn’t stay) and it feeds my curiosity. Robson always stays close to me, even on my lap if he’s feeling insecure somewhere new. The younger one wouldn’t dream of that – he’d be off investigating – the far more sociable soul. And I have heard it said by some people that you choose your parents!

I know. It’s not always good to hear! Just saying…

It’s interesting though, that I was sunbathing alone in that dream and here we all are – just as we were there – the three of us.

So what do you think?  Are your children like chalk and cheese?  Did you ever have a ‘feeling’ about them, a ‘vision’ or an experience like this?