I could not be more thrilled with the theme of The Gallery this week – Street Photography. When I first got my camera, DorkySon was only a few months old. I used to push his pram round and round the streets of Edinburgh until he fell asleep, and then I’d spend a couple of hours snapping away and taking photos of anything and everything around me – buildings, people, parks – whatever was there. I was of course spoiled with the number of street performers who fill the streets during the Edinburgh Fringe. It was much easier to take photos of people doing performances or dressed up in costumes than it was to take photos of ordinary strangers. That said, my favourite photo from that year or so when I was out pounding the streets, Nikon in hand, is not a flamboyant festival one. It’s this one. A lecturer having a sneaky fag break outside a university building, unintentionally turning himself into the ‘fifteenth pillar’. 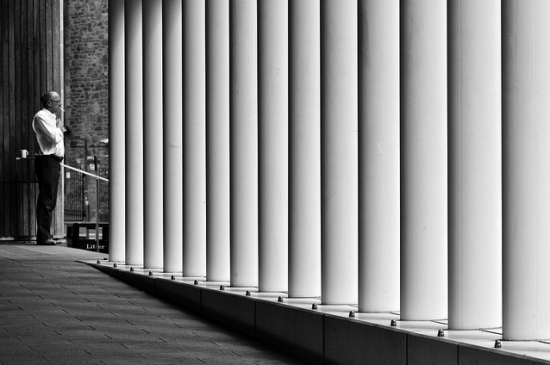 Thanks to Tara for prompting me to have a look through some old photos. If you’d like to see what other bloggers have done with the theme, head over to the Gallery at Sticky Fingers.