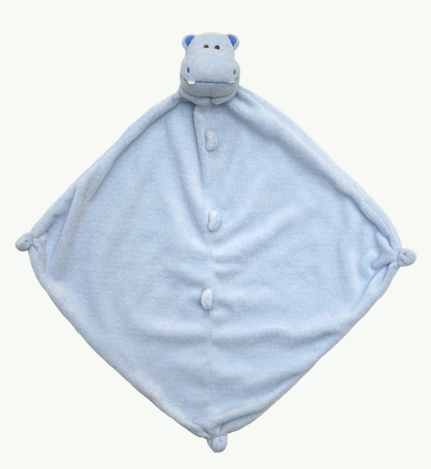 Binky is a blue hippo lovey, made by an American company called Angel Dear. He was a gift for DorkySon when he was born, and it was only a matter of weeks before they became inseparable. Originally, he looked beautifully clean and soft and fluffy like the photo above.

I can assure that you he doesn’t look like that anymore.

For the past two and a half years he has been trailed along behind DorkySon, through muddy puddles and piles of leaves. He has been puked on, painted, and loved so fiercely that he has started to come apart at the seams. DorkyGranny and I have both done emergency sewing jobs on him recently. A while ago, poor Binky went through a phase of being sucked; shortly followed by a phase of being scratched by DorkySon’s sharp little fingernails.

Taking care of Binky is something that involves everyone in the family. I’ve lost track of how many times I’ve had to retrace my steps because Binky has been thrown out of a pram, or left behind in a café. One time, after an hour of searching, I finally discovered that he had been tossed through the air and ended up in the frozen food cabinets in Waitrose. I can’t even begin to tell you what a disaster it would be if we lost him. So when we are out for walks, everyone is enlisted to help keep an eye on him.

I know that some people advise having two or three of these precious things so that you have a backup if one goes missing… but I investigated that in the early days and it between shipping and taxes it was going to cost nearly $100 to get one shipped across here. I am a loving mother, but I draw the line at that. Besides, by that point Binky had already developed that special scent of the most loved toy. He smelled a bit sicky, a bit spitty, a bit sour milky – the perfect combination to provide great comfort to DorkySon when he cuddled up to Binky at night. He used to put Binky over his head to help get to sleep. I think it was probably to make the room darker, but we used to joke that he was knocking himself out with the fumes.

(I feel obliged to mention that Binky does get washed on a regular basis – DorkySon sits in front of the washing machine, watching him go round and round, and clutching a blue lamb lovey as a poor second best – but you would never guess it to look at him.)

If you look through the Dorky Family photo album, Binky is in almost every shot. At DorkySon’s christening… on holidays… at every birthday celebration, every Thanksgiving dinner and every Christmas party. He even made it into our family photo in the pages of the Guardian.

“Binky is my best pal,” DorkySon says on a regular basis. But despite this, he seems well aware of Binky’s limitations. A couple of times I overstepped the mark with trying to include Binky in our activities. “Would he like a biscuit too?” I’d ask.

“Don’t be silly Mummy. Binky doesn’t have any hands for holding a biscuit with.”

Hard to argue with, that.

In the last few weeks, I have noticed a slight shift in the DorkySon-Binky dynamic. When we first moved house, Binky was a massive comfort to DorkySon, and he clung to him. However engrossed he was in a game or a video; Binky remained clamped tightly under his arm.

But as I’ve dropped him off at nursery the last couple of times, DorkySon has shoved Binky into my hands. “I don’t want Binky to come to nursery today,” he says. I haven’t argued with him, but instead have been quietly slipping Binky to one of the nursery workers at the door, and when I come back to pick DorkySon up after lunch he is always, inevitable, clutching Binky under his arm again.

Yesterday in the park, DorkySon dropped Binky on the ground and stamped on him a few times. Then he picked him up and said “Sorry Binky. Sorry. I still love you. Are you still my pal, Binky?”

I’m not sure what this is all about. Perhaps because DorkySon is now in with older kids at nursery he’s trying to be a ‘bigger boy’, and sees the rejection of a lovey as part of that. Or perhaps his relationship with Binky is a way of expressing all the feelings he has had recently about moving house and missing people and nervousness and excitement. I posted a few weeks ago about how mean DorkySon was being to me, and that seems to have stopped. Poor Binky is now getting the brunt of it instead.

Or perhaps I’m being a neurotic mother and trying to read something into nothing. Perhaps this, like every other phase we’ve been through in the last two and a half years, will pass soon enough.

I hope so. I must confess to a small inner smile of relief when I went along to watch DorkySon in his first ever nativity this morning, and my sweet wee shepherd had a blue hippo tucked under his arm. DorkySon may be almost ready to kick Binky out of the family, but I don’t think I am yet.