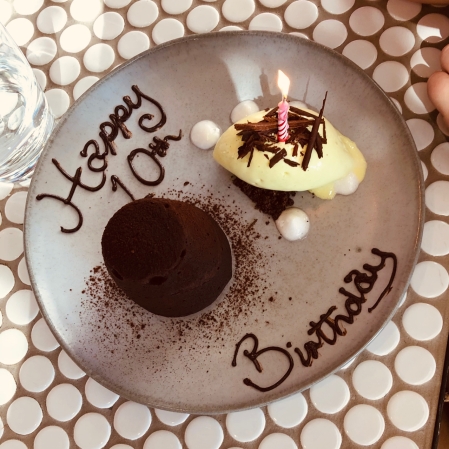 We are at the airport on the way to Auckland. There were air miles that were about to expire, and that’s as far as they’d take us, so we are headed across the Tasman. After recent events in Christchurch we imagine that it might be a strange and subdued time in New Zealand, but perhaps that makes it all the more important to visit and share some love.

DorkySon turns 10 while we’re away. I’m a little worried that an international trip, flying business class, sets the bar too high for future birthdays. But I also know this boy has never asked for a party, and that you only enter double figures once.

He has his headphones on as we wait to board, and sucks a berry smoothie from a glass bottle. Nine-nearly-ten is a funny age. I can see traces of the baby he was, and traces of the man he will be. He is serious, and self-contained, but has a beautiful smile and loves to laugh.

His birthday list was an indication of that in-between space he occupies, not least because it was addressed to Mum and Dad this year, instead of Mummy and Daddy. That transition is now complete. He wanted Jacqueline Wilson books, a model bus and a cuddly toy – all of which he got – but also a Fitbit, which he didn’t. He is prone to developing deep obsessions with every new interest, and a fitness tracker of any kind felt like a bad idea.

I have to be careful what I write on here these days. DorkySon reads every post, and takes great delight in quoting them back at me and pointing out typos. I’m under strict instructions not to embarrass him, but in eight years of blogging he can’t point to a single post he dislikes, so I must be doing okay.

He has printed out all my past posts and stuck them in ring binders, which he keeps at the end of his bed and reads almost daily. He keeps an eye on my Instagram, and the Facebook page associated with my blog. He also checks the pages of his schools (current and previous), of Sea Shepherd, and of Formula 1.

But in the same way that DorkyDad and I have agreed not to look in the black notebook he uses as a journal, DorkySon has agreed to stay away from my Twitter feed. He understands that it’s a place for conversations he is not yet part of. It feels very healthy and positive to me that we are having these conversations about internet use, privacy and personal boundaries so early – I hope it pays off in the years ahead. 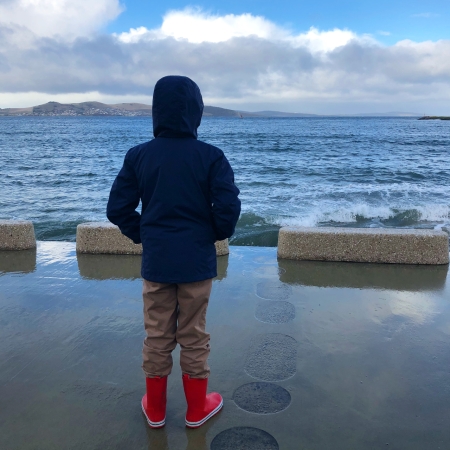 Often when it comes time to write DorkySon’s birthday post, I scroll back through my phone looking at the photos from the last year (I’ll put together a photo book too, at some point). As in previous years, there are dozens of old favourites: milkshakes and ice creams, bikes and basketball, the trampoline at MONA, and the traditional first day of school shot. But there are also lots of memories of new experiences: our visit to Scotland and Finland, a jet boat ride down the Huon, and DorkySon standing by an enormous tractor wheel at last year’s AgFest.

There’s a recent photo of him beside Louis Bernacchi’s statue on Hobart waterfront. We took a photo there just after we moved to Tassie, and it has become an annual tradition to measure his height against the bronze figure. He has gone from below-Bernacchi-waist-height to level-with-Bernacchi-armpit-height in the time we have lived here.

There’s also evidence that my phone is occasionally commandeered for DorkySon’s purposes: – time lapse videos of cruise ships and Metro buses, slow motion videos of LEGO bricks cascading to the floor, and screenshots of Dalmatian puppies. There may be a dog in our future, but despite his best efforts it will not be a spotty one.

I’m overwhelmed by the number of photos of beaches and boats. It is striking the relationship he has developed with the water: DorkySon on the Aurora Australis; in front of the RV Investigator; and on a ferry between Uist and Harris. In Auckland, we will capture him thumbs up and grinning in front of his favourite multi-million-dollar yacht in Viaduct Harbour. His highlight of the whole visit is the Maritime Museum.

When we go for a beach walk, which we did daily over the summer holidays, and now do every weekend, he seems to converse with the sea. He’ll wade in to his waist irrespective of whether he’s in bathers or fully clothed. This year, he swam out to the pontoon and back without a float for the first time – a rite of passage for children in Hobart for goodness knows how many years. He is learning the push and pull of the waves, the sting of salt in the throat, and the exhaustion that only overwhelms you when you get out of the water.

It’s now late April, more than two months since we were last in the water, but a line of tan remains across his lower back. It’s from a day on the body board at Seven Mile beach, when his rashie rose up and exposed a strip of skin. A little piece of summer carried over into autumn.

When we return from Auckland he is 10. Changed, but not. He was delighted on the day by a chocolate cake, with ‘Happy 10thBirthday’ written in icing on the plate.

We were in a sixth-floor apartment overlooking Victoria Park (which DorkySon said reminded him of the Meadows in Edinburgh), and most days he sat with me on the balcony, watching the city below. He was shocked by the number of people who smoked in public. We giggled together at a taxi driver parking in a hurry and rushing to use the public loo, and our eyes widened at the party bus passing below on Saturday night, its checkerboard dance floor lit up in a dozen colours.

This trip brought home how much easier it is to travel with an older kid. One who will try new foods, carry his own backpack through the airport, and walk around a city without complaining about his legs.

He ranks Auckland on a par with Helsinki, his other favourite city. He is a citizen of the world but doesn’t even realise it: three passports in the drawer, and 10 countries ticked off the list in 10 years.

He doesn’t know how lucky he is, but also, he does. As a family, we check in with each other daily and remind each other of the sweetness – how nice to have a home like Tasmania, but how nice also to have family and friends all over the world. When we get back there is a generous pile of cards and presents just to emphasise the point.

DorkySon returns to the news that he has been awarded Aussie of the month at school, for his volunteer work with Sea Shepherd. He is now signed up as a full member of the Tasmanian chapter, so last weekend we headed out for another beach clean-up, an hour of picking up cigarette butts and plastic straws, discarded syringes and bottle tops.

Perhaps that connection he feels to the sea – the fun he has in the water, swimming, splashing, boarding – is why he’s passionate about protecting it too. Wherever the drive comes from, it looks like we are committed to a few more years of shuttling him around to events and stalls. We are very proud.

Ten is a funny age, but it’s a great one. ‘Mum’ doesn’t get so many hugs these days, but when she does they’re completely unprompted, and all the lovelier for it. ‘Dad’ now works from home too, and it’s a joy to watch the two men of the house spend more time together: DorkySon seems happier, calmer, and less anxious. He is becoming more helpful with chores. More independent with doing things for himself. More open to new experiences.

I’m excited about the next year with my in-between boy. There will likely be a little too much F1 chat, and a few too many Dalmatian pics, but I think it’ll be a good one.