Since we first arrived in Tasmania, DorkySon has held a quiet fascination with Sea Shepherd.

When the Bob Barker was in port a couple of years ago he kept a wary distance. He loved the idea of protecting whales, but he wasn’t quite sure about those big, sharp teeth painted on the bow.

He loved to look out for Sea Shepherd supporters when we were out and about. At markets and festivals, the familiar logo was emblazoned across t-shirts, hoodies, and beanies, and he could always spot them a mile off.

The longer we have lived here, the more DorkySon has grown to love the ocean and with that has come a new appreciation for the work that Sea Shepherd does.

No longer content with showing his support through his hat collection and his beautiful wooden whale tail necklace, earlier in the year he sold some toys so he could make a donation.

Then, when the Grade 2 Peer leaders at his school had to pick an organisation to raise money for, he made the case for Sea Shepherd and won their support too.

A couple of weeks ago, the school enjoyed a visit from the education team and DorkySon came home full of stories about sharks, whales and turtles. He told me excitedly that more people are killed each year by vending machines than by sharks, and tried to describe just how huge the tape was that they unfurled in the playground to show the length of a blue whale. (33 metres, apparently!)

Last Sunday morning DorkySon and I joined about 40 other folk for a debris clean up on the Eastern shore. In just over an hour, we picked up almost 13,000 pieces of rubbish. From tiny micro plastics to cigarette butts to hubcaps and fishing line, it was grim work. 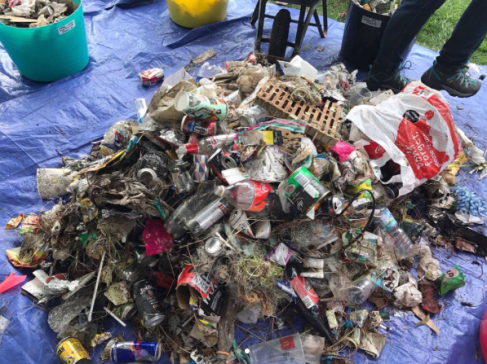 I was so impressed – not just with the dedication of volunteers giving up their Sunday morning to pick up other people’s trash – but with the family friendly community and the warm welcome. DorkySon obviously was too – he has persuaded his friends and classmates to do two more beach clean-ups at school this week!

DorkySon is only eight years old and there is a long way to go before he chooses his passion in life. But if he decides it is this – working for a better world and a cleaner ocean – nothing could make me prouder. I will give up as many Sunday mornings as he asks to support him in that endeavour.

Best to let DorkySon write about all this in his own words now, I reckon… 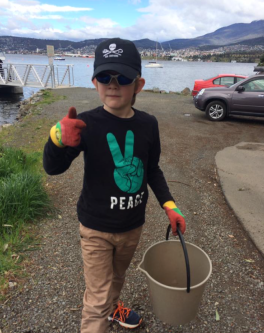 I like the Sea Shepherd because it’s satisfying knowing that by giving a donation or maybe picking up some trash you’re helping to save animals’ lives. Also, I think it’s such a good idea having an organisation that helps look after all marine creatures – from seabirds to turtles to sharks to whales.

When Sea Shepherd came to my school I think they were trying to get the message out to more people that we need to protect more lives. For example, we learned about one creature that there’s only 30 left of in the whole world – it’s called the Vaquita Porpoise.

When we went on the beach clean-up we were trying to stop the trash from polluting the river where all the fish live. It was really sad finding out that we had picked up 13,000 pieces of rubbish in just an hour, but it was also really good to know that we had saved 13,000 lives.

The people who run Sea Shepherd are really nice. Some of them are also quite brave, especially the ones who go out on the boats to stop whaling and sometimes have other people try to kill them.

Just today, our school went to do a beach clean-up and we picked up a few hundred pieces of rubbish. Other things you can do to help look after the oceans and the environment are turning out lights, cutting down on plastic, and doing more recycling.

When I’m older I might want to be a vegan like some of the Sea Shepherd people.

I am going to keep supporting Sea Shepherd and raising money for them for many years to come. I might even work for them – my friends and my teacher say they can imagine me working hard on one of the boats and wearing a pirate hat!

You can help too. There are a few things you might not know you can do.

The plastic rings around the top of milk bottles can get stuck and injure animals, so get your mum or dad to cut it in half before you put it in the rubbish or recycling.

When you have a party, you shouldn’t use balloons because they can float away and then the plastic can choke a bird.

You should try to reduce the amount of paper you use.

Also, the Sea Shepherd don’t get any money from the Government, so if you can make a donation it would help. Anything from $5 to $500 would be good! You can donate on their website here: https://my.seashepherd.org.au/donate

If you would like to learn more about the work of Sea Shepherd or make a donation then please visit their website.

If you’re in Hobart, Sea Shepherd Tasmania are holding an Artist Showcase to celebrate 40 years of the organisation. It runs from October 3rd – October 8th at the Waterside Pavillion on the docks. All details on their Facebook event page.

Photographs via: NoShoesSarah on Instagram and Sea Shepherd Tasmania.