Do you hear that?

No, neither do I. After almost two months of summer holiday, DorkySon is back at school and I am sitting at my desk in absolute silence. Several hours have gone by and there have been no requests for a glass of juice, or for a book to be read, or for another DVD.

It is very quiet. Nice, but quiet.

We have had the best summer holiday ever. As I was driving DorkySon to his swimming lesson earlier in the week we started chatting about all the things we have packed into it, and after five minutes of working through the list he laughingly shouted ‘Stop, stop, it’s making me tired just thinking about it all!’

The week around Christmas and New Year was the easiest bit, because DorkyDad was home too, and our days filled up naturally, but even after that January passed much more quickly than I had been expecting it to. DorkySon and I quickly got into a routine where we got what he calls ‘the boring stuff’ – shopping, housework, haircuts and the like – out of the way in the mornings, and then our afternoons were free for going to the park or on a playdate, painting, baking, snugging up on the sofa with a DVD, or doing whatever other activity he fancied. 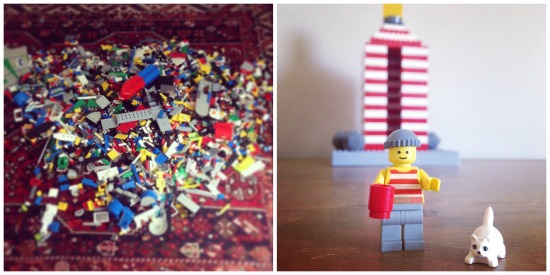 He got a ridiculous amount of Lego this Christmas, which took a week or two for us to finish building. But then once that was all done, he also decided that he wanted to rebuild all the things he had been given the previous Christmas and subsequently broken up all into one box. If you think it’s hard to build a garbage truck when you only have the correct bricks in front of you, you should try it when the pieces of the garbage truck are mixed up with the pieces from twenty other vehicles, and you have to find them as you go along! We are nearly there now though… the mountain of bricks on the floor of his playroom is shrinking further every day.

It almost feels like too much has happened to write about it all. We went to the Taste festival several times. When MONA FOMA was on DorkyDad and I went on our own to see Neil Gaiman and Amanda Palmer, and loved both shows to pieces. All three of us went to the Exxopolis inflatable walk-in sculpture by Architects of Air and had a wonderful time. (That became even more special when I learned that some blogging friends of mine were actually involved in making it!) We made it up Mount Wellington, at last. We spent a day on the beach at Opossum Bay. We spent some time exploring down the Huon Valley and drank our first Tasmanian Cider at Willie Smith’s Apple Shed. We went to a lot of birthday parties, to MONA on market day, and to a week of swimming lessons. It was a busy wee time, and I can’t wait to look through all my photos from the last few weeks.

The two things DorkySon wanted to do that we didn’t manage were a trip to Bruny Island and a trip around the city on the double decker bus… but I figure we have to save something for the next holiday. 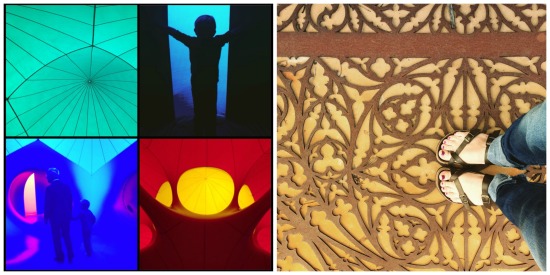 Now we are back to school, and back to work, and it is time to develop a new routine. DorkySon has just started prep, so he will be going for five days instead of just three. He is excited, and so ready to learn, but I think when the reality of the full week kicks in he may be a little miffed at the lack of time for things like library visits. Swimming lessons after school instead of on his day off are also going to be tiring.

This poor little blog has been neglected completely over the holiday. I’ve managed to squeeze in a few bits of writing in other places – a post at Vrai magazine about our move to Tasmania, and something for xoJane about food and marriage (I am totally blown away by all the lovely comments on that one, and it was a lot of fun to write!) – but the whole point of the holidays was to spend quality time with DorkySon and that is what I’ve done.