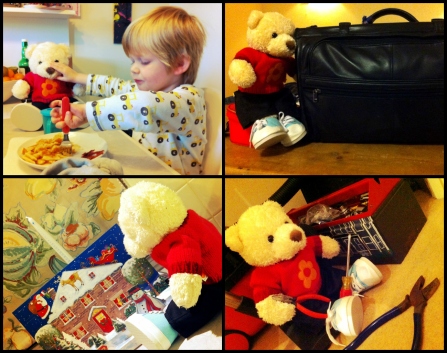 We came home on Thursday with a temporary new addition to the family.

He also comes with a diary that you have to fill in with words and photos, detailing what adventures he gets up to during his stay. Or as one friend calls it, a ‘Book of Competitive Middle Class Parenting.’

I had no idea how widespread these take-home projects are – it seems they are a staple part of nursery education across the country. When I posted something about Albert on Facebook I was inundated with sympathetic messages and anecdotes of horror from numerous friends who have been there before me. But at least there is limited damage that can be done to a bear – several people confessed to having class hamsters and goldfish die while in their care, and having to hurry out for a replacement before Monday morning.

I am immensely grateful for the fact that we were the first people to bring Albert home for the weekend, and therefore didn’t have anything to compete with. It was also good timing because DorkyDad headed off to Hong Kong on Friday for a work trip, so the arrival of Albert gave DorkySon something else to think about.

As it turned out, it was a very quiet weekend, even for us. DorkySon’s highlights (and therefore Albert’s highlights) were having pancakes for breakfast on Friday morning AND Saturday morning because of DorkyDad not being in the office, helping pack DorkyDad’s suitcase, and opening the first two windows of his advent calendar. That and the fact we had to call out an emergency plumber on Saturday to deal with the water that was leaking from our bathroom into the downstairs flat. Nothing like a man with a white van and a toolkit to make a three-year-old’s day.

So all that made it into Albert’s diary.

The only thing I decided to leave out was that we spent all day Sunday sitting on the sofa in our pyjamas, eating chocolate biscuits and watching CBeebies.

Because nobody needs to know that, right?