Today’s guest post is from Kirsty, who describes herself as a thirty-something wife and mother of one cheeky toddler. She blogs at damsonlane.com, and you can also find her on Facebook and Twitter.

Restraint does not come easily to me. I have a major character flaw that means I often say aloud things that probably should remain unsaid. Recently I seem to be better at biting my tongue but in all honesty this is due to my post-baby lack of confidence, general exhaustion and a feeling that there are more important things in life, rather than a deliberate mission to behave myself.

In the last few weeks I have started to feel more like the younger, feistier me but my perspective has changed. I’ve found myself in situations where I would previously have got up on my soap box but instead I have consciously decided to take a deep breath and walk away. The younger me would think I’ve gone soft, that I am a push over and that I have no sense of social responsibility but my younger self never stopped to think that her outbursts were actually impetuous outrages which didn’t achieve anything other than making the individuals involved feel under verbal attack (but don’t tell my younger self that, she’d be really pissed off).

After this period of quiet reservation and reflection I now feel ready to speak up again but this time I am going to be different, I want to direct my efforts in a new direction rather than wasting all that energy. I am going to choose my battles. I only have enough energy and time to give to one or two issues, causes or projects so rather than complaining about self-checkouts, the dinner guest who never brings wine, or the neighbours who don’t clear their bit of pavement when it snows (despite having three strapping teenage sons who could do with getting their hands dirty) I am going to save that energy for projects where my energy will actually make a difference. I also want to be more positive. As you might have gleaned, much of my energy has previously been wasted moaning and complaining to people who can’t change anything.  It sounds very cheesy but I genuinely want to make a positive change, however small, for something I believe in and have a passion for.

These aims are all well and good but what am I actually going to do? There are so many good causes and projects it is almost impossible to choose. I already have one idea linked to a project in my local community but I would be grateful for any suggestions. As a stay at home mum with a start-up business time is my greatest obstacle.  I am an advocate, educator, reader, blogger, nosy beggar and a talker and I need to find the best way of using my skills. I can’t be more specific as I think this is going to be one of those ‘I’ll know it when I see it’ situations.

Until I have decided what the grand plan is I’ve started with something really quick and easy but most importantly very worthwhile.  I have read a few things recently encouraging charities to take a more imaginative approach to fundraising, most recently from the lovely Dorkymum  and Damien Clarkson  and I think that Refuge, the largest single provider of specialist services for women and children fleeing domestic violence, is running such a campaign for Christmas. 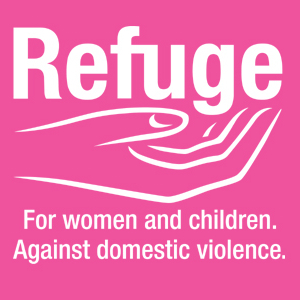 This year Refuge want to ensure that every woman and child in their care gets at least one gift to open at Christmas so they’ve set up a gift list at John Lewis and you can choose a gift that will be delivered to someone in Refuge’s care this Christmas.  All you need to do is visit John Lewis Gift List, enter list number 522953 and purchase a gift or gifts of your choice.  The list is only open until 6th December so if you would like to and you are able to get an extra gift this Christmas you don’t have long.

I’m not promising that after buying a gift for Refuge that you will feel better than if you had spent that time berating a lowly civil servant for wasting tax payers money by sending post to your address for the attention of someone who moved more than three years ago, but I am pretty sure that on Christmas Day I will feel better for having spent five minutes buying a gift for Refuge instead.

If you would like to know more about Refuge or how you can become a Refuge Champion visit their website.