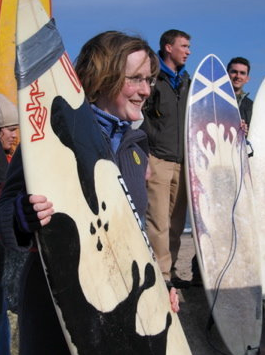 I have been having a bit of a political identity crisis recently, as I question whether I can still call myself green.

I think it’s possible to say that you are ‘life-long Labour’ or ‘a committed Conservative’ even if you’re never been an activist and all you’ve ever done is vote for that party. But I’m not so sure that the same applies to Greens. I think there is an expectation that being Green means putting the politics into practice.

Five years ago I was Green with a capital G. A fully paid up member of the Scottish Party, an occasional candidate, present at every committee meeting. I knew exactly what ‘being Green’ meant. It meant knocking on doors, delivering newsletters, carrying the end of a banner at a demo, street stalls in the rain, boycotting Nestle, working for an environmental charity, wearing anti-war and pro-renewable badges on my jacket…  Being Green was about trying to make a better world possible.

That world that I used to campaign for is still the world I would like to live in.; one of justice and equality, where we use and share resources in a sustainable way. But if I’m not doing anything active to advance that vision, or trying to persuade other people that it’s possible, am I still entitled to call myself green?

I still vote Green, of course. Whenever there’s an election on – be it local council, parliamentary or European – you’ll find me down at the ballot box, faithfully sticking my X beside a Green candidate.

But beyond that, it’s starting to feel like all the green gestures I make are somewhat tokenistic. I sign the petitions that happen to fall into my inbox. I buy organic, fairtrade and local produce where I can. We use Ecover. We recycle. We don’t have a car… It’s all good stuff, but it’s not really world-changing.

Sometimes I still get Christmas cards from university era friends that are addressed to ‘Comrade’, which makes me laugh. And there are one or two old photos of me on my Facebook page; bellowing something heartfelt into a loudhailer, or sitting on a debate platform looking earnest. But most of that ‘me’ is gone.

I’m wondering if the ‘me’ that’s left is allowed to call herself Green? Or even green?